In the angiogenesis process, integrins are members of a family of cell surface transmembrane receptors. They play a critical role particularly in blood vessel formation and the local release of vascular growth factors. Thyroid hormones such as T4 and T3 promote angiogenesis and tumor cell proliferation via integrin αvβ3 receptor. Integrins αvβ3 and αvβ5 are the main receptor types involved in the angiogenesis process, especially in binding with angiogenesis modulators containing an RGD recognition site. It binds to the integrin receptor. In addition, many studies suggest the effects of thyroid hormone analogs like T4 on thyroid hormone receptor (TR) via binding to integrin αvβ3, and the effects of the angiogenesis activity of T4 and T3 with an interaction site. It is located at or near the RGD recognition site of integrins. In this study, Tetrac, a deaminated analog of L-thyroxine (T4), and is a thyrointegrin receptor antagonist. 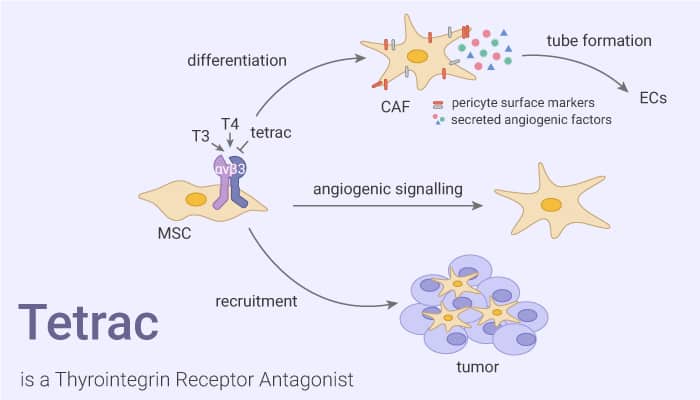 Tetrac, a deaminated derivative of T4 and a thyrointegrin receptor antagonist, is an angiogenesis inhibitor for research of cancer.

Tetrac inhibits the pro-angiogenesis response of the thyroid hormone by inhibiting the cell surface-initiated actions of T4 and T3 in the chick chorioallantoic membrane and many other angiogenesis models. Yoshida et al. found Tetrac is an effective inhibitor of retinal angiogenesis and of the pro-angiogenic effect of both erythropoietin and VEGF on retinal endothelial cells. Moreover, Tetrac induces anti-proliferation in HT-29 and HCT116 cells with different K-RAS status. Furthermore, it also inhibits the activation of ERK1/2 in HT-29 and HCT116 cells. In addition, Tetrac inhibits the expression of CCND1 and c-Myc but promotes the expression of CASP2 and THBS1.

In summary, Tetrac is a thyrointegrin receptor antagonist. It can block the actions of T3 and T4 as well as different growth factors-mediated angiogenesis. Tetra also has anticancer activity.