Cancer is a rapidly progressing disease. Chemotherapy is one of the treatment choices apart from surgery and radiation. However, during chemotherapy, a unique phenomenon called multidrug resistance (MDR) emerges. The cancer cells develop resistance to drugs with different chemical structures and mechanisms of action. On the other hand, MDR can attenuate the chemotherapy efficacy and raise the possibility of cancer recurrence. The ATP-binding cassette (ABC) transporter is primarily responsible for the drug efflux. ABCB1(P-gp/MDR1), ABCG2, ABCC1 and ABCC10 are the major inducers of MDR in cancer cells. Furthermore, ABCB1 is an apical membrane transporter that is ubiquitously expressed in kidney, intestine, placenta, liver, adrenal glands and blood-brain barrier (BBB). Overexpression of ABCB1 can trigger MDR and exhibit resistance to diverse substrate anticancer drugs. However, TTT-28 is a synthesized thiazole-valine peptidomimetic. It selective inhibits ABCB1 with high efficacy and low toxicity. 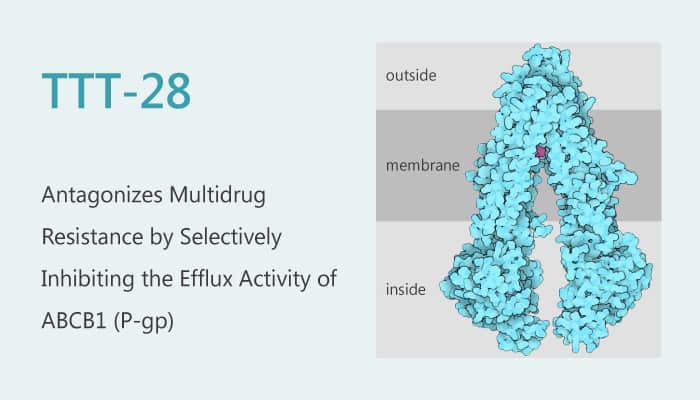 TTT-28 is a synthesized thiazole-valine peptidomimetic and selective inhibits ABCB1 with high efficacy and low toxicity.

In vitro, TTT-28 reverses ABCB1-mediated MDR in drug selected SW620/Ad300 cells and transfected HEK293/ABCB1 cells. The IC50s of TTT-28 in CCD-18Co, SW620 and SW620/Ad300 cells are 213.4±11.0 μM, 89.4±3.9 μM and 92.0±5.0 μM, respectively. Meanwhile, it raises the ABCB1-mediated MDR and increased the accumulation of [3H]-paclitaxel in ABCB1 overexpressing cells. TTT-28 does not interfer with the expression level and localization of ABCB1. It results from blocking the efflux function of ABCB1. In addition, TTT-28 interacts at the drug-substrate-binding site and actives the ATPase activity of ABCB1 in a concentration-dependent fashion.

All in all, TTT-28 is a selective inhibitor of ABCB1 with high efficacy and low toxicity. It has high clinical value for the co-administration of TTT-28 and ABCB1 substrate chemotherapeutic drugs in cancer patients. It also stimulates further research on circumventing multidrug resistance and ABC transporter.

FR 180204 is an ATP-competitive and Selective ERK Inhibitor