XIAP is a protein that prevents apoptosis. XIAP is a member of apoptosis protein family (IAP) inhibitors. Specifically, IAP blocks cell death in vitro and in vivo by inhibiting different caspases. The caspase inhibitory activity of XIAP is negatively regulated by at least two XIAP interacting proteins XAF1 and Smac/Diablo. Besides, XIAP also has a carboxyl-terminal ring domain and E3 ubiquitin ligase activity, which can guide the proteasome degradation of target proteins. In addition, XIAP can regulate copper homeostasis by directly interacting with ligands such as copper, so as to integrate the cellular response to various stimuli.

Moreover, XIAP is also translated through a rare CAP-independent mechanism called IRES (internal ribosomal entry site). A natural inhibitor of XIAP is Smac/Diablo. Furthermore, it replaces the bound caspase from the bir2 / BIR3 domain of XIAP, thereby reactivating the execution of cell death. Now, we will introduce a potent antagonist for XIAP and cIAP1, Birinapant.

Birinapant (TL32711), a Bivalent Smac Mimetic, is an Antagonist for XIAP and cIAP1. 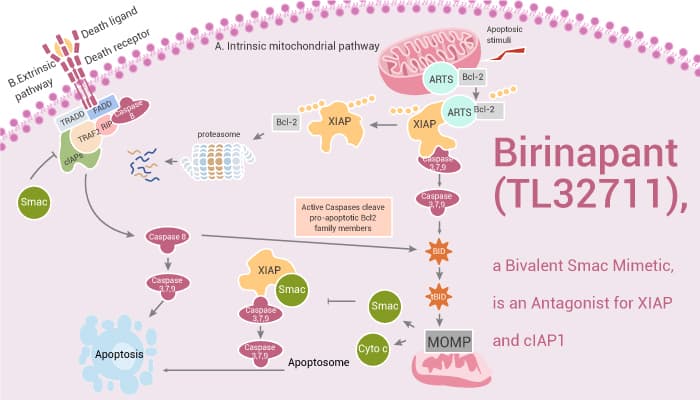 Above all, Birinapant is a bivalent Smac mimetic. It is a potent antagonist for XIAP and cIAP1 with Kds of 45 nM and less than 1 nM, respectively. Meanwhile, Birinapant induces the autoubiquitylation and proteasomal degradation of cIAP1 and cIAP2 in intact cells. Nonetheless, the results in the formation of a RIPK1: caspase-8 complex, caspase-8 activation, and induction of tumor cell death. Birinapant targets TRAF2-associated cIAPs and abrogate TNF-induced NF-κB activation.

Once again, Birinapant with 30 mg/kg by i.p. every third day (*5) shows antitumor efficacy. Obviously, Birinapant is devoid of overt toxicity in preclinical models.

All in all, Birinapant, a bivalent Smac mimetic, is a potent antagonist for XIAP and cIAP1.

E7820 is an α2 Integrin Inhibitor with Anti-Tumor Activity