Over the last decade, the FGFRs family has become an attractive validated therapeutic target notably in cancer. It consists of four members (FGFR1 to FGFR4) which are structurally related cell surface RTKs. This FGF-FGFR axis participates in key biological processes that play significant roles in cell functions such as proliferation, growth, apoptosis, and differentiation. To date, considerable efforts have been focused on the development of small-molecule inhibitors targeting FGF/FGFR signaling in tumorigenesis. In this study, scientists focus on the group of small molecule inhibitors, TKI258, AZD2171, and PD173047, the first non-selective generation of FGFR TKIs which bind to the conserved ATP-binding domain in RTKs. Notwithstanding, this group has been used to treat several types of solid tumors such as breast cancers, squamous cell lung cancers, metastatic urothelial cancers, intrahepatic cholangiocarcinoma, but the benefits from clinical trials were fairly variable.

To overcome these drawbacks, scientists have developed a second generation of inhibitors of 2 pan-FGFR TKIs such as AZD4547 and CH5183284. Coincidentally, scientists discovered a candidate 56q (CPL304110). 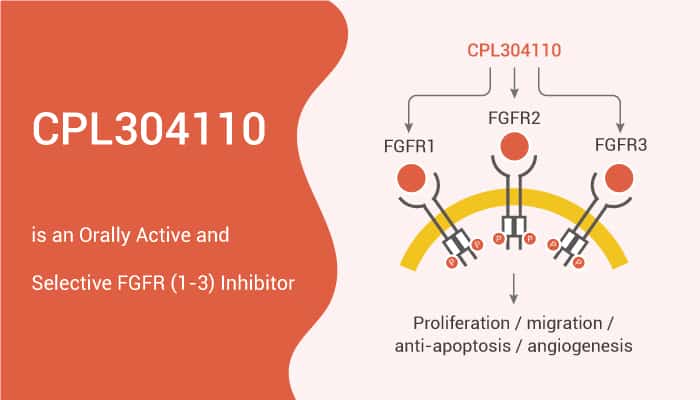 SIS3 is a Potent and Selective Inhibitor of Smad3 Phosphorylation