Bcl-2 (B-cell lymphoma 2) is a family of evolutionarily related proteins. These proteins govern mitochondrial outer membrane permeabilization (MOMP) and can be either pro-apoptotic (Bax, Bad, Bak and Bok among others) or anti-apoptotic (including Bcl-2 proper, Bcl-xL, and Bcl-w, among an assortment of others). Particularly, the Bcl-2 and Bcl-xl proteins are crucial inhibitors in the procedure of apoptosis. And they are commonly overexpressed in many tumors. The overexpression of Bcl-2 and Bcl-xl proteins is closely related to tumor initiation, aggressive, and chemoresistance. The mechanism by which Bcl-2/Bcl-xl inhibitors enhance chemotherapy is that chemotherapeutic drugs induce death signals by activating or inactivating pro-apoptotic or anti-apoptotic Bcl-2 family proteins.

Pelcitoclax (also known as APG-1252) is a potent Bcl-2/Bcl-xl inhibitor with antineoplastic and pro-apoptotic effects. Compared with Navitoclax (ABT-263), Pelcitoclax is a nonselective Bcl-2/Bcl-xl inhibitor, with high affinity to Bcl-2/Bcl-xl, but substantially less affinity to MCL-1. In vivo, Pelcitoclax changes to a reactive metabolite named APG-1252-M1, which has significant antitumor effects in acute myeloid leukemia. Similarly, in a xenograft model of small cell lung cancer, long-term administration of Pelcitoclax can cause tumor regression. In addition, in Bcl-2/Bcl-XL-dependent cancer cells, Pelcitoclax specifically binds to and inhibits the activity of the pro-survival proteins Bcl-2 and Bcl-XL. Moreover, Pelcitoclax induces the release of cytochrome c, which subsequently activates caspase 3 and PARP-1. Pelcitoclax has a strong anti-tumor effect by inducing apoptosis, and has synergistic effect with chemotherapy in vivo and in vitro. 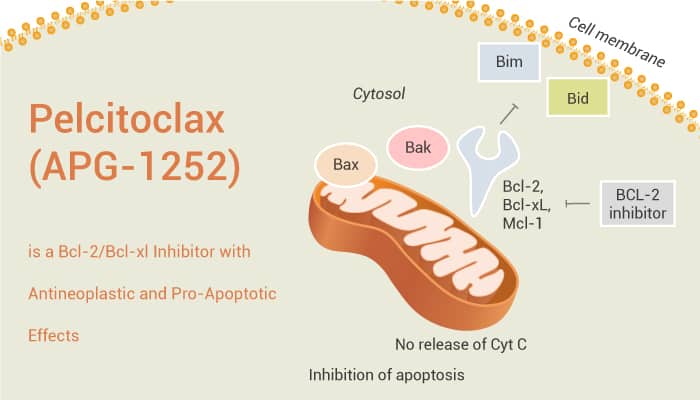 In conclusion, Pelcitoclax has potent anti-tumor effects through ntrinsic mitochondrial pathway of apoptosis in many cancer cells.

LCH-7749944 is a Potent PAK4 Inhibitor and Induces Apoptosis

SU16f is a Selective PDGFRβ Inhibitor for Gastric Cancer Therapy