Akt1 belongs to the Akt subfamily of serine/threonine kinases, which contains the SH2 (SRC homologous 2-like) domain. Specifically, Akt kinase is the central node of the signal transduction pathway, which is important for cell transformation and tumor progression. Besides, Akt is a key mediator of growth factor-induced neuronal survival in the developing nervous system. Moreover, Akt1 is crucial for the transmission of growth-promoting signals. The change of Akt activity is the most common change in malignant tumor cells. Furthermore, Akt (Akt1) initially transformed the oncogene of retrovirus Akt8. This promotes the proliferation, survival, apoptosis resistance, transformation, and metastasis of leukemia cells. Therefore, Akt represents an important molecular target for AML treatment. 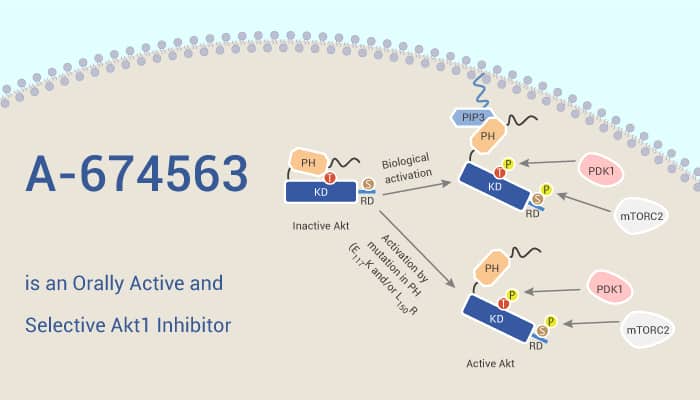 A-674563 is an Orally Active and Selective Akt1 Inhibitor.

In the second place, A563 with 0-10 µM significantly decreases GSK3 and MDM2 phosphorylation in STS cells. Nonetheless, A563 inhibits all STS cell lines activity, with IC50 values at 48 hours ranging from 0.22 µM (SW684) to 0.35 µM (SKLMS1). Obviously, A563 induces G2 cell cycle arrest and apoptosis in STS cells. Particularly, A563 upregulates the expression of GADD45A independent of p53.

Last but not the least, A-674563 with 40 mg/kg/d by p.o. shows no significant monotherapy activity.  the combination therapy (A-674563+paclitaxel) has significantly improved efficacy in the PC-3 prostate cancer xenograft model. A-674563 increases plasma insulin in an oral glucose tolerance test. Additionally, A563 with 20 mg/kg/bid by p.o. exhibits slow tumor growth and a significant difference in tumor volume without significant weight loss of mice.

All in all, A-674563 is an orally active and selective Akt1 inhibitor.