In the survival-promoting subfamily, Mcl-1, Bcl-xL (Bcl-2l1), Bcl-2a1, and Bcl-b, like Bcl-2, inhibit the initiation of apoptosis. Interestingly, Bcl-2 is the first gene to promote prolonged cell survival rather than increased proliferation. It is highly expressed in many hematological malignancies to varying degrees, providing protection from carcinogenesis and cell death induced by external pressure. Additionally, BH3 mimetics include a new class of Bcl-2 inhibitors. Whether used as a single drug or in combination with other anticancer drugs, they show promising results in several hematological malignancies. Here, we will introduce a BH3 mimetic, ABT-737. 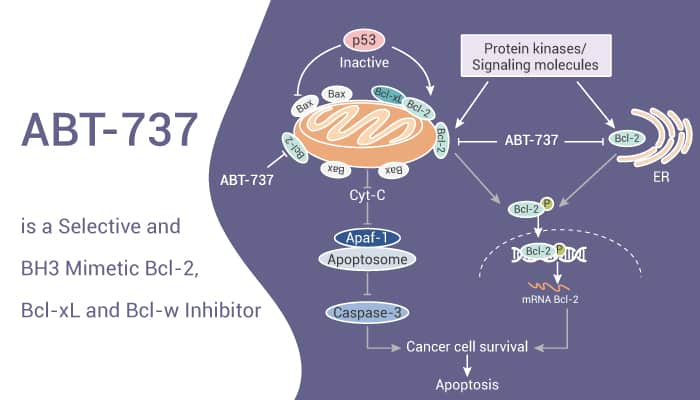 At first, ABT-737, a BH3 mimetic, has EC50s of 30.3 nM, 78.7 nM, and 197.8 nM for Bcl-2, Bcl-xL and Bcl-w, respectively. Specifically, ABT-737 induces the disruption of the BCL-2/BAX complex and BAK-dependent but BIM-independent activation of the intrinsic apoptotic pathway. Besides, ABT-737 induces autophagy and has the potential for acute myeloid leukemia (AML) research.

Secondly, ABT-737 binds BCL-2, BCL-XL, and BCL-W with high affinity (Ki<1 nM). But it binds weakly (Ki>460 nM) to other antiapoptotic BCL-2 family members, including MCL-1 and BFL-1. Moreover, ABT-737 binds the BH3-binding groove of BCL-XL and BCL-2. ABT-737 with 100 nM for 1-72 hours induces apoptosis and synergizes with chemotherapy in HL-60 cells. Furthermore, ABT-737 causes approximately 80% of HCT116 cell death. The BAX knockout variant is completely resistant to ABT-737. ABT-737 has no effect on cell cycle distribution.

Finally, ABT-737 with 20, 30 mg/kg/day by i.p. for 21 days suppresses the leukemia burden by 48% and 53%, respectively, in human leukemia xenograft. In fact, ABT-737 significantly extends the survival of mice in this aggressive leukemia model.

SIS3 is a Potent and Selective Inhibitor of Smad3 Phosphorylation