Positive transcription elongation factor P-TEFb is a kinase composed of CDK9 and cyclin T. Specifically, P-TEFb plays an important role in the transcriptional regulation of RNA polymerase II (pol II) in eukaryotes. Besides, P-TEFb mediates the positive transcriptional extension of the new mRNA chain by phosphorylating the S2 residue of YSPTSPS. YSPTSPS is repeated in series at the C-terminal domain (CTD) of RNA polymerase II (RNAP II). Moreover, P-TEFb is a cyclin-dependent kinase. It can phosphorylate DRB sensitivity inducer (DSIF) and negative elongation factor (NELF), as well as the carboxyl-terminal domain of Pol II large subunit. This leads to a shift to productive extension, resulting in mRNA synthesis. 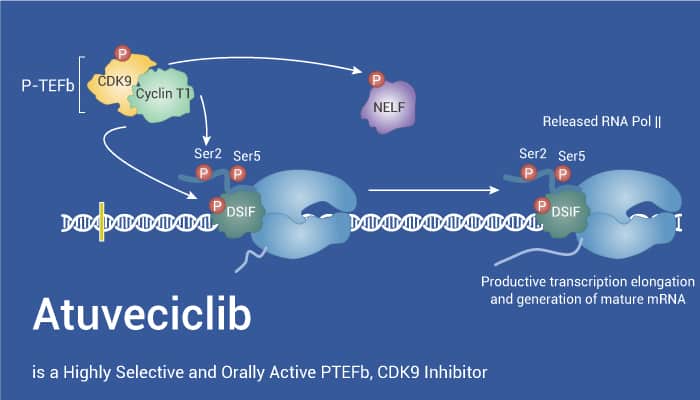 In the second place, In vivo efficacy studies in the MOLM-13 xenograft model in mice, Atuveciclib demonstrates high antitumor efficacy. Interestingly, Atuveciclib with 6.25 or 12.5 mg/kg/day results in a dose-dependent antitumor efficacy. It has a treatment-to-control (T/C) ratio of 0.64 and 0.49, respectively. In fact, the 25 mg/kg once daily dose is the maximum tolerated dose in nude mice. Furthermore, Atuveciclib with 25 or 35 mg/kg, three days on/two days off, results in a T/C ratio of 0.33 and 0.20, respectively. In an in vivo pharmacokinetic study in rats, Atuveciclib shows low blood clearance (CLb 1.1 L/kg per hour).

All in all, Atuveciclib is a potent and highly selective, oral PTEFb/CDK9 inhibitor.

SJ6986 is a Selective and Orally Active GSPT1/2 Degrader

GNE-987, a BET PROTAC Degrader, is a Part of PROTAC-Antibody (CLL1) Conjugate for ADC