Actin, a family of globular multi-functional proteins, is the most abundant protein in most eukaryotic cells. It forms microfilaments in the cytoskeleton, and the thin filaments in muscle fibrils. Actin participates in many important cellular processes, including muscle contraction, cell motility, cell division and cytokinesis, vesicle and organelle movement, cell signaling, and the establishment and maintenance of cell junctions and cell shape. The production of actin is also key to the process of infection by some pathogenic microorganisms. Certain human pathogens, such as Toxoplasma gondii, have evolved their own actin cytoskeletal systems. The make-up of the cytoskeleton is related to the pathogenicity of intracellular bacteria and viruses, particularly in the processes related to evading the actions of the immune system.

F-actin is an effective ATPase, and most of the crystal structure has been resolved in the form of ATP binding. Nucleotide hydrolysis by F-actin is one of the main factors regulating the transition between G- and F-actin. The ATP state is more stable than the ADP state. In vitro, actin monomers join the fast-growing barbed end of the filament in the ATP state, hydrolysis takes place in the filament, and ADP-actin monomers dissociate faster from the pointed end. This steady-state mechanism of actin polymerization/depolymerization is known as actin filament treadmilling.

Cytochalasin B is an inhibitor of actin polymerization. 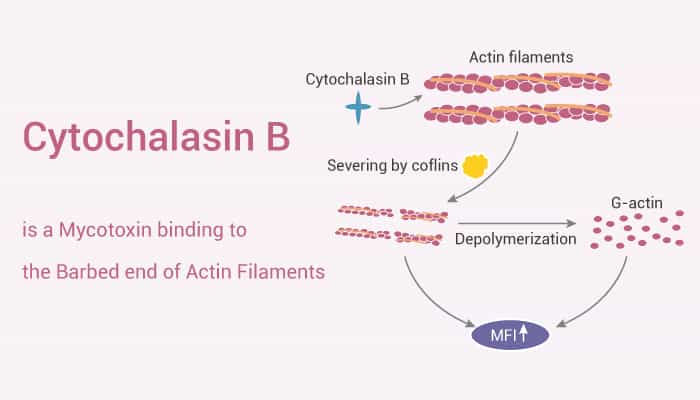 Cytochalasin B is a cell-permeable mycotoxin binding to the barbed end of actin filaments, disrupting the formation of actin polymers. At sufficiently high concentrations, cytochalasin poisoning of cells leads to a number of morphological and functional effects, including arborization, inhibition of endocytosis and secretion, suppression of cytoplasmic division and enucleation. Moreover, in a previous study, Cytochalasin B causes G2/M cell cycle arrest and apoptosis via both the extrinsic and the intrinsic pathways. In addition, Cytochalasin B dose-dependently increases the life expectancy of Balb/c mice bearing with P388/ADR leukemias.

In summary, Cytochalasin B is a cell-permeable mycotoxin. It interferes with cytoskeleton functions by inhibiting actin polymerization.