Topoisomerases are enzymes that regulate the overwinding or underwinding of DNA. The winding problem of DNA arises due to the intertwined nature of its double-helical structure. Topoisomerases are isomerase enzymes that act on the topology of DNA. Type I topoisomerase cuts one strand of a DNA double helix, relaxation occurs, and then the cut strand is reannealed. Type II topoisomerase cuts both strands of one DNA double helix, pass another unbroken DNA helix through it, and then reanneal the cut strands. Topoisomerase II (Top II) is an important host factor for host DNA replication. However, since the accumulation of DNA double-stranded breaks (DSBs) causes cell cycle arrest, cell death, or apoptosis through the DNA damage response, both the expression level and the catalytic activity of Top II are regulated during the cell cycle. 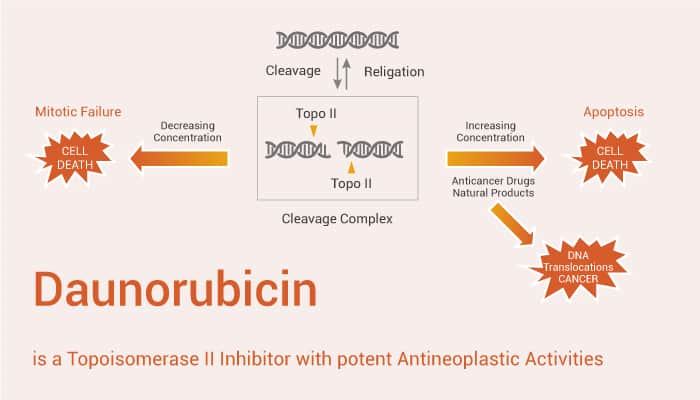 To sum up, Daunorubicin is a topoisomerase II inhibitor with a wide spectrum of anticancer activity and anti-HBV effect.

Tirabrutinib is a Selective BTK Inhibitor

HM43239 is an Orally Active and Selective FLT3 Inhibitor