As previously introduced, the tumor suppressor p53 plays a critical role in the prevention of tumor development. While human, murine double minute 2 (MDM2) protein is a primary endogenous cellular inhibitor of the tumor suppressor p53. And it has been pursued as a promising cancer therapeutic target. A study from Yangbing Li first reported a small-molecule human, murine double minute 2 (MDM2) degrader, MD-224, based on the proteolysis targeting chimera (PROTAC) concept. 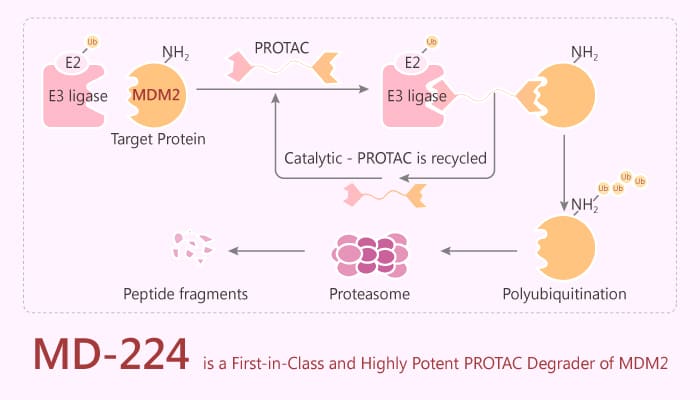 MD-224 induces rapid degradation of MDM2 at concentrations <1 nM in human leukemia cells, and achieves an IC50 value of 1.5 nM in inhibition of growth of RS4;11 cells. MD-224 has the potential to be a new class of anticancer agents.

However, until now, the in vivo preclinical studies are still lacked, more verification in animals needs to be carried out.

Collectively, MD-224 is thus a highly potent and efficacious MDM2 degrader and warrants extensive evaluations as a new class of anticancer agents.

Tirabrutinib is a Selective BTK Inhibitor