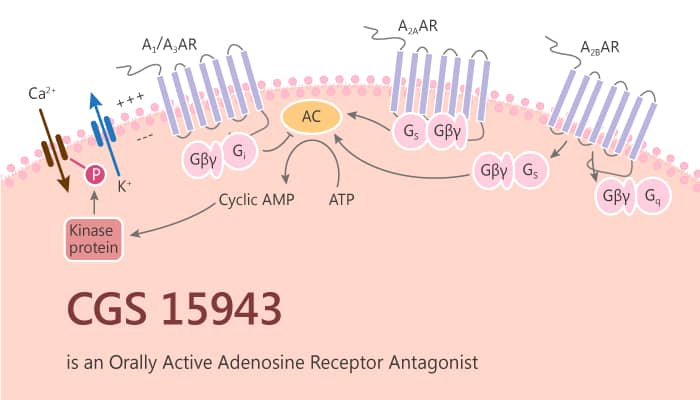 CGS 15943 selectively targets p110γ indicating that it may represent a vital lead compound to develop drugs that can specifically target this PI3K isoform whose key role in cancer progression is emerging. CGS 15943 reduces the phosphorylation of Akt at its residues Ser473 and Thr308 in HLF and Sk-Hep-1. Similarly, CGS 15943 inhibits Akt Ser473 phosphorylation in HepG2 cells and in PLC-PRF-5. CGS 15943 inhibits the kinase activity of the class IB PI3K isoform p110γ with an IC50 of 1.1 μM. Researchers also detected a slight inhibition of the class IA PI3K isoform p110δ with an IC50 of 8.47 μM. CGS 15943 can directly inhibit the lipid kinase activity of p110γ.

All in all, CGS 15943 is a nonselective antagonist with Ki values in the low nanomolar range for adenosine A1 and A2A receptors and an approximately tenfold lower potency at the adenosine A2B and A3 subtypes.

PU02 is an Allosteric Antagonist of 5-HT3 Receptor