Cancer is a usual disease and a leading cause of death in the world. Therefore, developing new agents specifically targeting cancer cells has achieved more and more researches. As it is widely believed that cancer can be treated by inducing tumor cells to undergo senescence or apoptosis, screening for drug-like small-molecule compounds that can inhibit cancer growth.

Apoptosis is a normal cell mechanism in development and homeostasis. Two cell signaling transduction pathways have been demonstrated that are involved in apoptosis: the mitochondrial pathway and death receptor pathway. In this study, scientists screened a chemical library screen in order to find new agents that can selectively inhibit the viability of cancer cells. Among the compounds, a novel compound PU02 (NMMP) was identified. The authors evaluated the antitumor activities of NMMP and explored the mechanisms by which this compound exerts its effects. 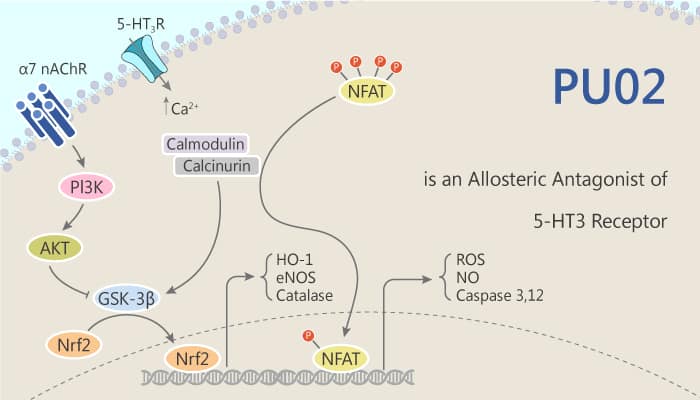 PU02, a derivative of 6-MP, is an allosteric antagonist of the 5-HT3 receptor.

PU02 has the potential for cancer therapy.

CWP232228 is a Highly Potent and Selective Wnt/β-catenin Inhibitor