Keap1-Nrf2 is the major regulator of cytoprotective responses to electrophilic chemicals or reactive oxygen species (ROS).  Upregulation of Nrf2 inducing by inactivation of Keap1 is often observed in cancer cells. Aberrant activation of Nrf2 in cancer cells accelerates proliferation and metabolism. Meanwhile, Nrf2 is a transcription factor that regulates cellular defense responses, and is subject to Keap1-dependent ubiquitination and proteasomal degradation. Recently, many studies have demonstrated constitutive activation of Nrf2 is consistent with its ability to resist chemical and oxidative stress. Moreover, Nrf2 contributes to the development of drug resistance in cancer cell lines and tissues. Therefore, there is increasing interest in the therapeutic potential of Nrf2 inhibition as a strategy to overcome chemoresistance.

Brusatol (also known as NSC 172924), a quassinoid compound, is a selective Nrf2 signaling inhibitor. In addition, Brusatol has a potent anticancer effect, and ameliorates chemoresistance in both in vitro and in vivo cancer models. For example, in mouse Hepa-1c1c7 hepatoma cells, Brusatol provokes a rapid and transient depletion of Nrf2 protein. Importantly, the inhibitory effect of Brusatol on Nrf2 does not depend on its repressor Keap1, proteasome and autophagic protein degradation systems, and protein kinase signaling pathways that are known to regulate Nrf2. Mechanistically, Brusatol selectively reduces the protein level of Nrf2 through enhanced ubiquitination and degradation of Nrf2. Additionally, in A549 xenografts, Brusatol and Cisplatin cotreatment induce apoptosis, reduce cell proliferation, and inhibit tumor growth more substantially when compared with Cisplatin treatment alone. 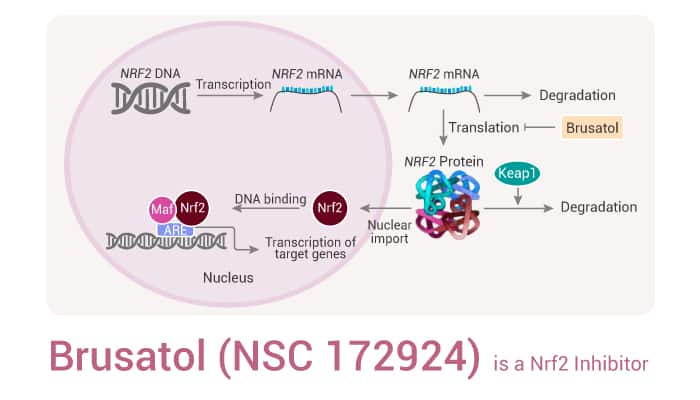 To sum up, Brusatol inhibits the Nrf2 signaling pathway by reducing the protein level of Nrf2, with anticancer activities.