TOPK (T–lymphokine-activated killer cell–originated protein kinase, also known as PBK or PDZ-binding kinase) is a Ser/Thr protein kinase. Many types of human cancer, including breast and lung cancers, highly expresses it. Thus, TOPK might be a promising molecular target for drug development. Moreover, TOPK is in the “consensus stemness ranking signature” gene list that is up-regulated in cancer stem cell-enriched tumors. It involves poor prognosis in multiple types of cancer. TOPK is an attractive molecular target for the treatment of a wide range of human cancers. OTS964 is an orally active, high affinity and selective TOPK. It is also a potent inhibitor of the cyclin-dependent kinase CDK11, which binds to CDK11B with a Kd of 40 nM. 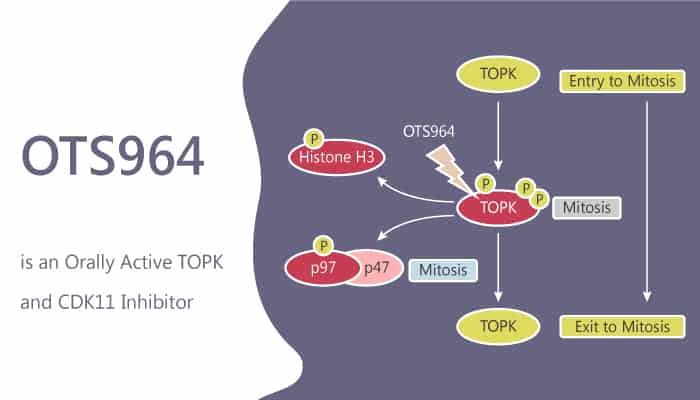 OTS964 (2 μM) could inhibit 79.7% of TOPK activity. In addition, the mean and the SD of the inhibitory effects against other kinases were 18.5 and 24.6%, respectively. OTS964 inhibits the growth of TOPK-positive cells with low IC50 values. Moreover, OTS964 decreases the autophosphorylation of TOPK (Thr9), as well as phosphorylation of histone H3 (Ser10), in both T47D and LU-99 cells. OTS964 induces cytokinesis defects followed by apoptosis. In addition, OTS964 increases the expression of LC3-II and decreases the expression of P62, both in a dose-dependent manner in Hs683 and H4 cells.

OTS964 also enhances the differentiation of HSCs to a megakaryocyte population. In addition, OTS964 induces complete tumor regression in xenograft models of human cancer through inhibition of cytokinesis. Although oral administration of OTS964 caused some hematopoietic toxicity, this was a transient effect.

In summary, OTS964 is a promising therapeutic agent that has the potential to treat a wide range of human malignancies.