ERK1 and ERK2 are related protein-serine/threonine kinases that participate in the Ras-Raf-MEK-ERK signal transduction cascade. This cascade participates in the regulation of a large variety of processes. It includes cell adhesion, cell cycle progression, cell migration, cell survival, differentiation, metabolism, proliferation, and transcription. MEK1/2 catalyze the phosphorylation of human ERK1/2. Whereas the Raf kinase and MEK families have narrow substrate specificity, ERK1/2 catalyzes the phosphorylation of hundreds of cytoplasmic and nuclear substrates including regulatory molecules and transcription factors. In summary, the RAS-RAF-MEK1/2-ERK1/2 pathway is a key signal transduction pathway in the cells. Critically, it remains constitutively active in approximately 30% of human cancers.  It has key roles in cancer development, maintenance, and progression while being responsible for poorer prognosis and drug resistance. In this study, Rineterkib is an orally active RAF and ERK1/2 inhibitor in the study of a proliferative disease characterized by activating mutations in the MAPK pathway. 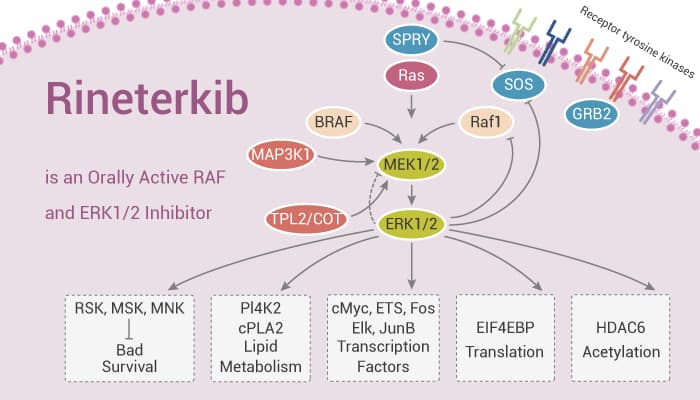 The mutational activation of Raf in human cancers supports the important role of this pathway in human oncogenesis. Rineterkib (compound B) is an orally active RAF and ERK1/2 inhibitor. The activity is particularly related to the treatment of KRAS-mutant NSCLC, BRAF-mutant NSCLC, KRAS-mutant pancreatic cancer, KRAS-mutant colorectal cancer (CRC) and KRAS-mutant ovarian cancer. Rineterkib significantly reduces the tumor volume in the Calu-6 human NSCLC subcutaneous tumor xenograft model in mice. Rineterkib has the potential for the research of NSCLC and CRC.

In summary, Rineterkib is an RAF and ERK1/2 inhibitor. It has demonstrated preclinical activity in multiple MAPK activated cancer cells and xenograft models.

NMS-P515 is an Orally Active and Stereospecific PARP-1 Inhibitor

Trilaciclib is an Orally Active CDK4 and CDK6 Inhibitor