Targeted protein degradation is an emerging strategy to use small molecules to knock down a protein by hijacking the ubiquitin-proteasome system. PROTACs are bifunctional degrader molecules. They compose a ligand for the target protein and a ligand for E3 ligase recruitment, connected by a linker. An attractive feature of PROTACs is their catalytic mode of action, as anyone molecule may perform multiple rounds of target ubiquitination and degradation. Different target classes have been successfully degraded. They include epigenetic targets such as bromodomain-containing BRD2, BRD3, and BRD4, BRD9, TRIM24, SIRT2, PCAF/GNC5, protein kinases, nuclear receptors, and E3 ubiquitin ligases to self-degrade. In this study, the authors design a probe-quality degrader for a ligase-target pair deemed unsuitable: VHL and BRD9. VZ185 is a potent, fast, and selective degrader of BRD9 and of its close homolog BRD7 (DC50: 1.8/4.5 nM). 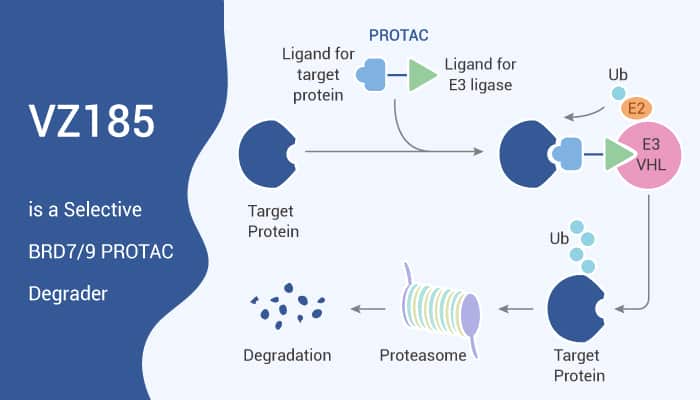 VZ185 is an effective and highly selective degrader of BRD7/9 proteins in cells. In vitro PK data further shows high stabilities of VZ185 in both plasma and microsomes from both human and mouse species, as well as high aqueous kinetic solubility (up to ∼100 μM). It also shows preference for BRD9 as compared to BRD7 (BRD9-DC50 = 4 nM; BRD7-DC50 = 34 nM). VZ185 shows potency in a panel of other human cancer cell lines, such as EOL-1, A-204. The DC50s are between 2 and 8 nM for BRD9.

In summary, VZ185 is a highly selective, potent, and rapid dual degrader with a slight preference for BRD9 over BRD7. VZ185 is a new high-quality chemical probe. It will be valuable to explore the biology and therapeutic potential of degrading these two proteins.