Bruton’s tyrosine kinase (abbreviated Btk or BTK) is a tyrosine kinase that is encoded by the BTK gene in humans. BTK, a kinase expressed in B cells and bone marrow cells, has a well-characterized important role in B cells, vital role in B cells highlighted by the human primary immune deficiency disease, X-linked agammaglobulinemia (XLA), which results from mutation in the BTK gene. BTK plays an essential role in the BCR signaling pathway. Recent appreciation for the extent to which BTK drives select hematological malignancies such as chronic lymphocytic leukemia (CLL) has spurred the development of targeted BTK inhibitors. 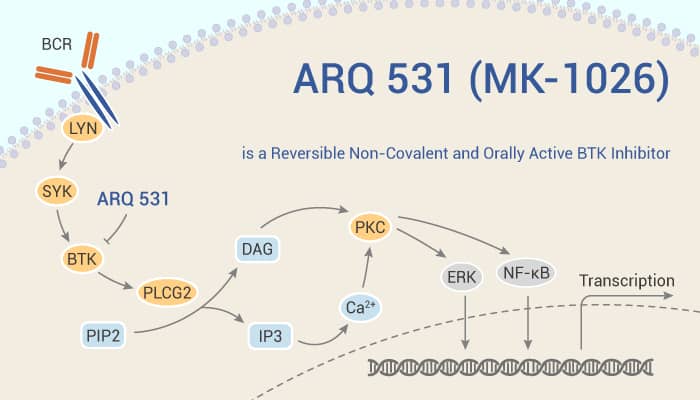 To sum up, ARQ 531 is a potent, ATP-competitive, reversible non-covalent and orally active BTK inhibitor, with anti-tumor activities.

CJ-2360 is a Potent and Orally Active ALK Inhibitor