Anaplastic lymphoma kinase (ALK) is a receptor tyrosine kinase belonging to the insulin receptor (IR) kinase superfamily. It highly expresses in adult brain tissue and exerts an important role in the development of the nervous system.
Deregulation of ALK originally presents by the identification of at (2;5) chromosomal translocation in anaplastic large cell non-Hodgkin’s lymphoma (ALCL). Following, the fusion of ALK with other genes presents in other cancer, such as large B-cell lymphoma and non-small-cell lung cancer, et al.

In addition to chromosomal translocations leading to fusion proteins. Subsequently, the amplification of the ALK gene and activating point mutations of the wild-type ALK protein also presents in neuroblastoma, breast cancer et al.

In this article, we will introduce a potent and orally active ALK inhibitor, CJ-2360. 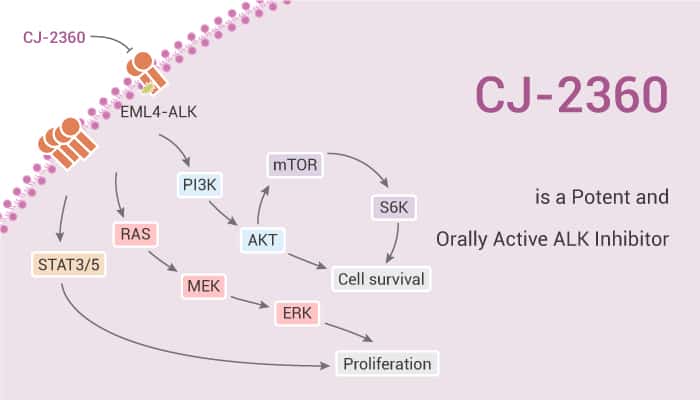 CJ-2360 at 100 mg/kg is capable of achieving complete in the KARPAS-299 xenograft tumor model. It exhibits long-lasting tumor regression. Additionally, all tumors do not return until day 53, 23 days after the last dose. Besides, CJ-2360 is very effective in the inhibition of ALK phosphorylation. As well as ERK and STAT3 phosphorylation in KARPAS-299 tumor tissue, CJ-2360 plays its effect persisting for at least 24 h.

In conclusion, CJ-2360 potently inhibits wild-type ALK kinase and several ALK mutants. And it is capable to achieve complete tumor regression in the ALK-positive xenograft model with oral administration.

CXD101 is a Selective and Orally Active Class I HDAC Inhibitor