Epidermal Growth Factor like domain 7 (EGFL7) is an endothelial cell-derived factor, mostly expressed in endothelial cells. EGFL7 takes part in the regulation of the spatial arrangement of cells during vascular tube assembly. The Egfl7 gene encodes active miR-126 which is related to cardiovascular diseases as well as the formation of cancer. Egfl7 specifically expresses in endothelial cell at physiological conditions, however, it aberrantly expresses in tumor cells of human cancers. In egfl7-knockdown zebrafish, vascular tubulogenesis is inhibited and the blood circulation is blocked, exhibiting pericardial oedema and hemorrhage. In vitro, EGFL7 improves cell immigration, thus, over-expression of the gene increases tumor growth and metastasis in xenograft mice. Therefore, EGFL7 is a common target for the treatment of cardiovascular diseases and cancer. Here, we will introduce an EGFL7-targeting monoclonal antibody (mAb), Parsatuzumab.

Parsatuzumab (RG 7414) is a humanized mAb, acting as an immunomodulator and binding to EGFL7. 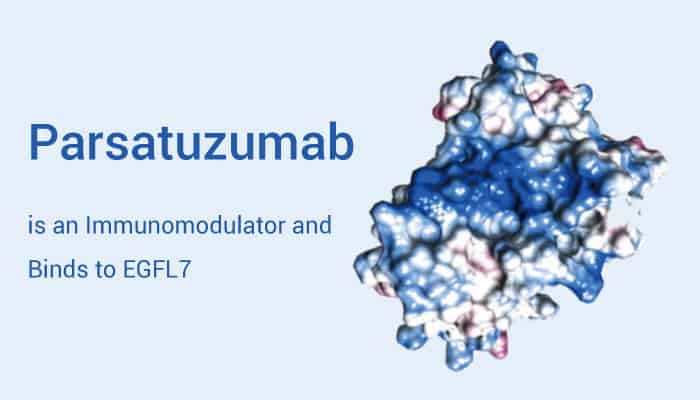 In conclusion, Parsatuzumab is a potent EGFL7-targeting mAb, that has the potential to research anticancer and angiogenesis.

Repotrectinib is a potent ROS1 and TRK Inhibitor

COH000 is an Allosteric, Covalent and Irreversible Inhibitor of SUMO-Activating Enzyme

CQ211 is a Potent and Selective RIOK2 Inhibitor