SB-218078 is an ATP Competitive and Reversible Chk1 Inhibitor 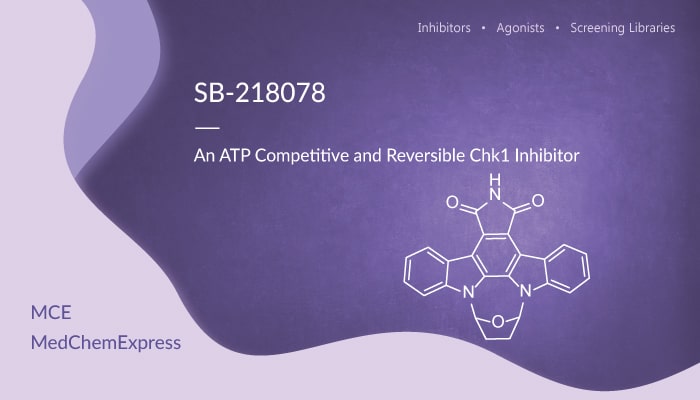 The regulation of cell cycle checkpoints is a critical determinant of the manner in which tumor cells in response to chemotherapies and radiation. Many effective cancer therapies work by causing DNA damage; however, resistance to these agents remains a significant limitation in the treatment of cancer. Especially, checkpoint activation that causes cell cycle arrest, which provides both the opportunity and capacity for cells to repair DNA damage. Rather, tumor cells are particularly dependent on the G2 DNA-damage checkpoint. Agents that are capable of overriding G2 arrest following DNA damage, such as 7-hydroxystaurosporine. Thus, it is likely that an appropriate checkpoint antagonist would have significant clinical utility.

In this article, the authors demonstrated that Ser-216 of cdc25C is a target of the DNA damage checkpoint. At the same time, they identified and characterized a compound, SB-218078 that potently inhibited human Chk1. it prevents G2 arrest following DNA damage, suggesting that Chk1 activity is required for G2 checkpoint arrest. SB-218078 also enhances the cytotoxicity of DNA-damaging agents. Additionally, SB-218078 inhibits Chk1 phosphorylation of cdc25C with an IC50 of 15 nM.

Moreover, in vivo, SB-218078 (5 mg/kg; intraperitoneal injection; for 16 hours; C57/Bl6 mice) treatment could promote a strong increase of γ-H2AX and apoptosis throughout the lymphoma, while having no effect on a healthy spleen in Myc-induced lymphomas mouse model.

Lenalidomide, a Ligand of CRBN, is an Orally Active Immunomodulator