Mammalian TEAD proteins regulate cell proliferation and contact inhibition as transcriptional mediators of Hippo signaling. The Hippo pathway plays an essential role in controlling organ size and maintaining tissue homeostasis. Downstream from the Hippo kinase core are the co-factors YAP and TAZ transcriptional co-activators. Importantly, when the Hippo kinase core is inactivated, YAP and TAZ become dephosphorylated and translocate into the nucleus, where they interact predominantly with the TEAD transcription factors, resulting in the activation of transcriptional programs important for cell proliferation, survival, and migration. According to reports, Hippo-YAP pathway is dysregulated frequently in malignant mesothelioma and in other YAP-driven cancers and diseases. Therefore, small molecules that block TEAD function have been the subject of considerable research. 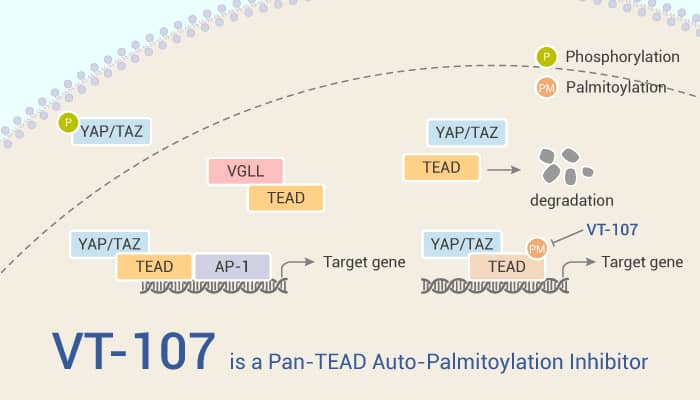 In conclusion, VT-107 is a potent and pan-TEAD auto-palmitoylation inhibitor. VT-107 can inhibit the proliferation of NF2-deficient mesothelioma cells.