Sphingosine-1-phosphate ( S1P ), the bioactive sphingolipid metabolite, is a critical regulator of many physiological and pathophysiological processes, including cancer, atherosclerosis, diabetes and osteoporosis. S1P and its receptors (S1P1-5) play critical roles in many pathologic processes, including cancer. S1P/sphingosine-1-phosphate receptor (S1PR) axis plays critical role in a wide variety of physiologic and pathophysiological processes in cancer. S1P2 is a potential mediator of otoprotection. S1P2 may serve as a therapeutic target for attenuating cisplatin-mediated ototoxicity.

JTE-013 is a known specific S1P2 antagonist. JTE-013 inhibits the specific binding of radiolabeled S1P to membranes of Chinese hamster ovary cells transfected with human and rat S1P2, with IC50 values of 17 nM and 22 nM. Moreover, JTE-013 alone produces a significant increase in excitability in a time- and concentration-dependent manner in 70-80% of recorded neurons. JTE-013 is capable of increasing excitability via a mechanism that is dependent on G protein activation. JTE-013 blocks the binding of S1P to S1PR2 expressed in CHO cells with an IC50 of ∼20 nM. However, JTE-013 has little to no effect on S1P binding to either S1PR1 or S1PR3 even at concentrations up to 10 μM. 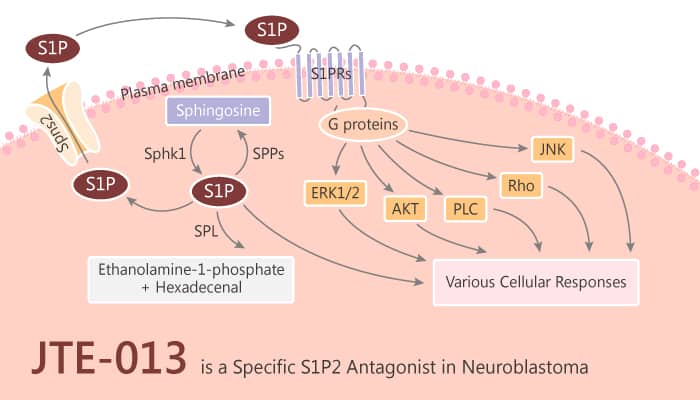 JTE-013 inhibits not only S1P-induced vasoconstriction but also vasoconstriction induced by KCl, the prostanoid analog U46619, and endothelin-1. JTE-013 inhibits C-C motif ligand 2 expression and is able to significantly inhibit subsequent tumor-associated macrophage infiltration in neuroblastoma xenografts. In addition, JTE-013 may be unstable in vivo and is rapidly metabolized in liver microsomes. All in all, JTE-013 is a specific, potent, and stable S1P2 antagonist for potential clinical and experimental use.

GPP78 is a Nampt Inhibitor and an Autophagy Inducer