The aldehyde dehydrogenase (ALDH) superfamily has 19 protein-coding family members with varying tissue or development expression. In addition, ALDHs metabolize endogenous and exogenous aldehydes to their corresponding carboxylic acids to prevent the accumulation of toxic aldehydes. Besides, ALDH1A enzymes are also involved in the biosynthesis of retinoic acid (RA). Moreover, ALDHs mediate resistance to chemotherapy via direct drug metabolism and by regulation of reactive oxygen species. Other studies have used knockdown of select ALDH1 family members to support their role in chemotherapy resistance. Furthermore, ALDH activity is essential to chemotherapy resistance in breast cancer, and ALDH1A2 and ALDH1A3 are implicated in chemotherapy resistance in mesothelioma. Given the role of ALDH1A isozymes in chemotherapy resistance, stem cell biology, and its link with CSC, ALDH1A activity has been as a therapeutic target in cancer. CM10 is a potent and selective aldehyde dehydrogenase 1A family inhibitor (ALDH1Ai). 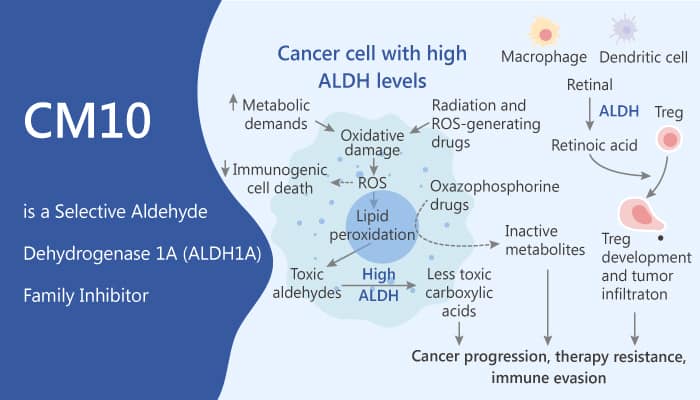