TP53 (p53) is the single most frequently altered gene in human cancers, with mutations being present in approximately 50% of all invasive tumors. Besides, p53 is mutated in at least 80% of samples in some of the most difficult-to-treat cancers. Therefore, the mutant p53 protein is an important candidate target against. Traditionally, p53 can suppress cancer formation and progression by inducing genes involved in cell cycle arrest, apoptosis or senescence or by participating in DNA repair. Impairment or loss of p53 function is widespread, if not universal in human malignancy. Moreover, these cancers include high-grade serous ovarian cancers, triple-negative breast cancers, oesophageal cancers, small-cell lung cancers, and squamous cell lung cancers. COTI-2 is an orally available third-generation activator of p53 mutant forms by reactivating mutant p53 and inhibiting the PI3K/AKT/mTOR pathway. Meanwhile, COTI-2  has anti-cancer activity. 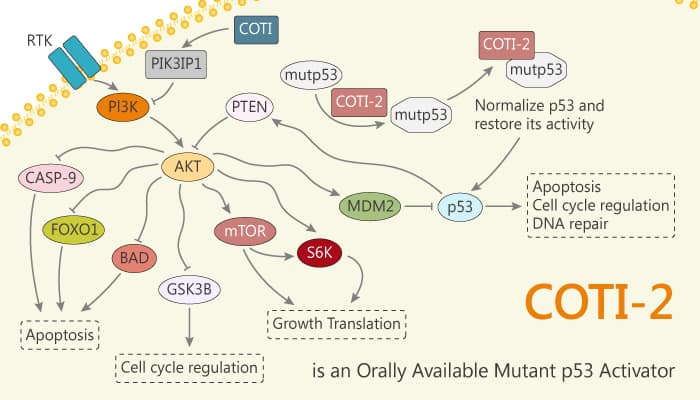