Human pancreatic cancer cells can secrete the proangiogenic molecules, such as VEGF, IL-8, and basic fibroblast growth factor. VEGF is the major proangiogenic factor in most types of human cancer. Therefore, in this article, we will introduce a potent, selective and orally active EGFR tyrosine kinase inhibitor, PKI-166.
Firstly, in vitro, in L3.6pl cells, PKI-166 can enhance the cytotoxicity of cells with Gemcitabine. Meanwhile, it can inhibit EGFR autophosphorylation in a dose-dependent manner in human pancreatic cancer cells. 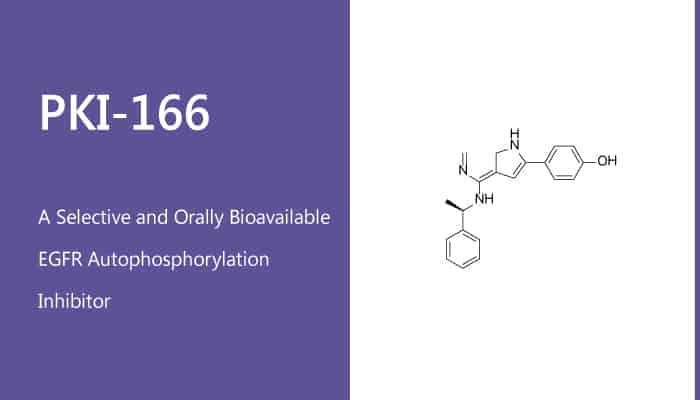 Next, we will describe PKI-166’s anti-cancer activities in cancers.

In an athymic nude mouse model with L3.6pl cells. After seven days, the mice were randomized into four treatment: i.p. injections of Gemcitabine (125 mg/kg); daily oral administrations of PKI-166 (100 mg/kg); twice-weekly Gemcitabine and daily PKI-166 and the HBSS control group.

The combination of Gemcitabine and PKI-166 produces a greater decrease in pancreatic median tumor volume when compares to other groups. In addition, PKI-166 treatment alone or combines with Gemcitabine exhibits well tolerance as the maintenance of body weight shown.
Besides, the control group mouse with HBSS can survive 37 days. And after treatment with Gemcitabine alone, PKI-166 alone, and combination therapy, the median survival time is 56, 70, and 75 days, respectively.

It’s worth noting that all control mice or mice with Gemcitabine or PKI-166 alone have pancreatic tumors. Whereas in mice receiving the combination regimen, the tumor incidence is 75%. The incidence of histologically confirmed lymph node metastasis in control or Gemcitabine/PKI-166 alone is similar, but the incidence has an obvious increase in the combined-treatment group.

In summary, PKI-166 can inhibit human pancreatic cancers and show a blockade of the EGF-R signaling pathway. Besides, the PTK inhibitor PKI-166 in combination with Gemcitabine produces a significant decrease in tumor growth. PKI-166 is a promising compound for cancer therapy.

BI-4924 is a Selective PHGDH Inhibitor