Specific inhibitors of RAF and MEK kinases to target BRAF– and RAS-mutant tumors are developing. Interestingly, BRAF/MEK inhibitor combination treatment blocks phosphorylated extracellular signal-regulated kinase (phospho-ERK) reactivation in melanoma cells, a phenomenon that may possibly reduce the emergence of clinical resistance.  ERK represents an attractive downstream target to exploit. SCH772984 is a specific inhibitor of ERK1 and ERK2 activity. It shows robust efficacy in RAS– or BRAF-mutant cancer cells. Moreover, SCH772984 is also effective in single-agent BRAF or MEK inhibitor resistance as well as in cells. This became resistant to the combination of these agents. SCH772984 is an ATP-competitive ERK1 and ERK2 inhibitor with IC50 values of 4 and 1 nM, respectively. It is highly selective, with only seven kinases of 300 tested showing more than 50% inhibition at a concentration of 1 μM. 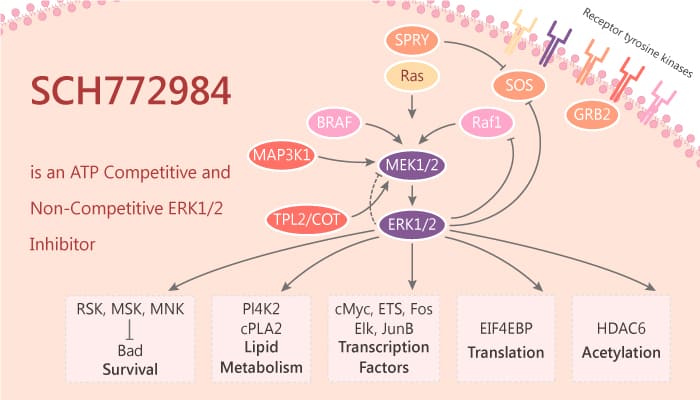 SCH772984 is an ATP-competitive and selective ERK1 and ERK2 inhibitor with IC50 values of 4 and 1 nM, respectively.

In a panel of 121 human tumor cell lines, SCH772984 shows EC50s less than 500 nM in approximately 88% and 49% of BRAF-mutant or RAS-mutant tumor lines, respectively. SCH772984-sensitive melanoma cells reveal a G1 arrest as well as an increase in the sub-G1 fraction indicative of apoptosis. Less than 20% of cells wild-type for both RAS and BRAF are sensitive to SCH772984.

SCH772984 leads to 98% tumor regression in BRAF-mutant LOX melanoma xenografts. Besides, SCH772984 results in 36% regression in the KRAS-mutant pancreatic MiaPaCa model. Importantly, The robust inhibition of ERK phosphorylation accompanies with tumor tissue tumor regression. SCH772984 is well tolerated on this schedule as measured by morbidity, lethality, or bodyweight loss.

All in all, SCH772984 is an ERK1/2 kinase inhibitor. It has antitumor activity in MAPK inhibitor-naïve and MAPK inhibitor-resistant cells containing BRAF or RAS mutations.

AA92593 is a Selective and Competitive OPN4 (Melanopsin) Antagonist

JI051, a Stabilizer for Hes1-PHB2 Interaction