NUPR1 is an intrinsically disordered protein (IDP) with an entirely disordered conformation. It binds to DNA in a manner similar to other chromatin proteins to control the expression of gene targets. At the cellular level, NUPR1 participates in many cancer-associated processes, including cell-cycle regulation, apoptosis, senescence, cell migration and invasion, development of metastasis, and DNA repair responses. Indeed, NUPR1 has recently elicited significant attention for its role in promoting cancer development and progression in the pancreas. In addition, genetic inactivation of Nupr1 stops the growth of hepatocarcinoma, non-small cell lung cancer, cholangiocarcinoma, glioblastoma, multiple myeloma, and osteosarcoma. Thus, NUPR1 is a promising therapeutic target for developing new cancer therapies. In this study, ZZW-115 shows a dose-dependent tumor regression with no neurological effects. It also shows an ability to induce cell death mainly by necroptosis. 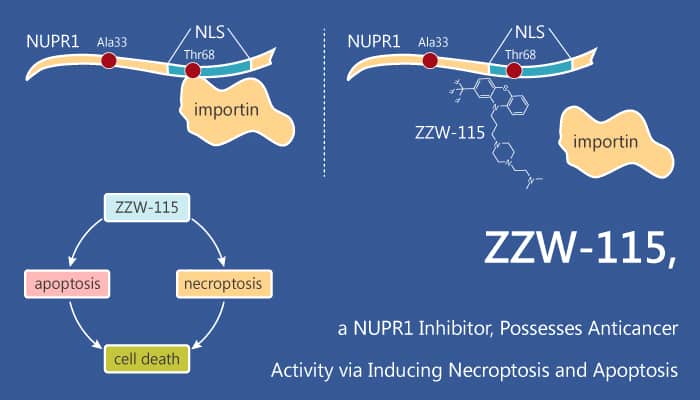 ZZW-115 is a potent NUPR1 inhibitor, with a Kd of 2.1 μM. It induces tumor cell death by necroptosis and apoptosis. It is efficient in killing cancer cells, with an IC50 in the range of 0.84 μM (ANOR) to 4.93 μM (HN14). ZZW-115 is also efficient to kill these tumor cells with an IC50 in the range of 0.42 μM (Hep2G cells) to 7.75 μM (SaOS-2 cells). Moreover, ZZW-115 induces pancreatic cell death by necrosis and apoptosis. It induces a decrease in ATP production and induces a ROS overproduction.
LDH release is significantly higher in ZZW-115-treated cells than in control cells in a concentration-dependent manner. Similarly, caspase 3/7 activity is also greater in ZZW-115-treated cells. These experiments demonstrated that ZZW-115 exerted both pronecrotic and proapoptotic effects.

In addition, it also inhibits the growth of pancreatic xenografted tumors. ZZW-115 treatment shows that tumor size is almost unmeasurable in some cases.

In summary, ZZW-115 is a potent NUPR1 inhibitor exerting anticancer activity via necroptosis.

Venadaparib (IDX-1197) is a Potent and Selective PARP Inhibitor

AES-135 is a Potent HDAC Inhibitor