Androgen receptor (AR) is a ligand-dependent nuclear transcription factor and a member of the steroid hormone nuclear receptor family. In fact, AR has many biological functions and can control the expression of specific genes. AR can interact with its natural ligands 5α-Dihydrotestosterone (DHT) binds to testosterone. Importantly, AR signal transduction may also be relevant to tumor development. Androgens can play a role in DNA binding-dependent manner through AR to regulate target gene transcription. Androgen functions through the androgen receptor (AR), which is a 110 kDa member of the steroid receptor transcription factor family. Meanwhile, testosterone and dihydrotestosterone (DHT) are physiological ligands of AR. In prostate tissue, DHT is the main ligand of AR, which is passed by testosterone through 5 α- Reductase synthesis.

Nonetheless, protein hydrolysis targeting chimerism (PROTAC) is an effective endogenous protein degradation tool. In particular, it can ubiquitin target proteins through the ubiquitin-proteasome system (UPS), thus achieving the role of tumor growth. The potential advantages of PROTAC technology can make up for the shortcomings of traditional drug therapy, thus promoting its rapid development. Here, we will introduce a potent PROTAC androgen receptor degrader, ARD-69. 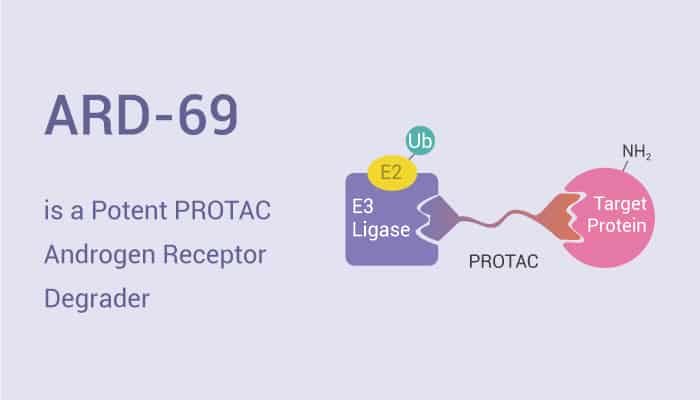 Last but not the least, a single dose of ARD-69 can effectively reduce the level of AR protein in xenotransplantation tumor tissues of mice.

All in all, ARD-69 is a potent PROTAC androgen receptor degrader.

LDN193189 is a Selective BMP Type I Receptor Inhibitor