Transient receptor potential melastatin (TRPM) ion channels play an important role in many physiological processes. Additionally, TRPM8 is the primary cold and menthol sensor, the TRPM8 structure reveals a three-layered architecture. The amino-terminal domain with a fold distinct among known TRP structures, Besides, it forms a large two-layered cytosolic ring that extensively interacts with the transmembrane channel layer.

TRPM8-deficient mice exhibit a result that the channel is critical for environmental cold sensing. Except for cold and menthol, TRPM8 is sensitive to voltage and phosphatidylinositol-4,5-biphosphate (PIP2). As a result, this demonstrates that TRPM8 is a polymodal sensor and integrates multiple chemical and physical stimuli into cellular signaling.
All members of the TRPM family contain a large N-terminal region. this region comprises four regions of high homology (melastatin homology regions), MHRs. Besides, the MHR domains and the putative C-terminal coiled-coil are important for channel assembly, trafficking, and function. 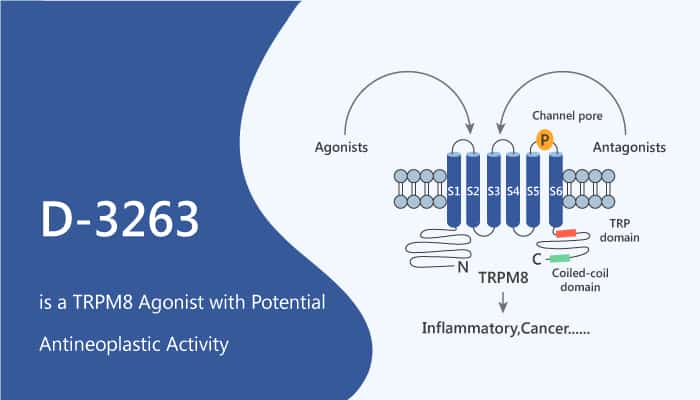 D-3263 has potential antineoplastic activity. In addition, D-3263 binds to and activates TRPM8 and may result in an increase in calcium and sodium entry. It also leads to the disruption of calcium and sodium homeostasis. And the induction of cell death in TRPM8-expressing tumor cells also appears. D-3263 decrease dihydrotestosterone (DHT) levels, which may contribute to its inhibitory effects on prostate cancer and BPH.

In a rat model of BPH, D-3263 alone results in a reduction in prostate hyperplasia of rats with evidence of a dose-response. Furthermore, The highest dose of the TRPM8 agonist D-3263, given in combination with Finasteride, results in lower prostate weights than the highest dose of D-3263, or Finasteride is given alone, suggesting a potential additive effect.

In conclusion, D-3263 is a potent TRPM8 agonist and can be used for cancer research.

ML339 is a Selective CXCR6 Antagonist