A study from Victoria K Woodcock suggested that AZD0424 is an inhibitor of the proto-oncogenic non-receptor tyrosine kinases Src and ABL1. The kinase plays an indefensible role in cancer. Src expresses lowly in the majority of cell types and participates in regulating bone metabolism, proliferation, and angiogenesis. Src also plays a role in the regulation of cell invasion and metastasis in cancer, including breast cancer, lung cancer, and colon cancer. In addition, Src expression relates to advanced malignancy and poor prognosis in a variety of cancers including colorectal carcinoma and osteosarcoma. Moreover, the upregulation of Src expression and/or signaling is associated with resistance to many classes of anti-cancer drugs including those targeted against HER-2 and EGFR. While ABL1 kinase also represents a potential target with relevance in solid tumors. 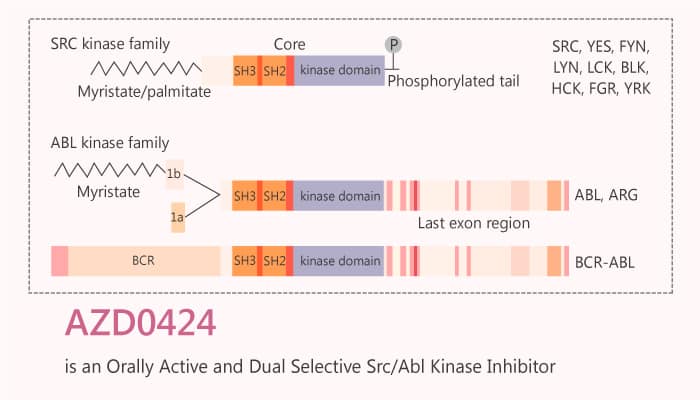 Vorolanib is an Orally Active Inhibitor of VEGFR and PDGFR