Previous studies have demonstrated that hypoxia-inducible factor 2α (HIF-2α) is a key oncogenic driver in clear cell renal cell carcinoma (ccRCC). PT2385 was the first reported HIF-2α inhibitor. However, PT2385 was restricted by variable and dose-limited pharmacokinetics. This results from extensive metabolism of PT2385 to its glucuronide metabolite. Herein, a study from Rui Xu described the discovery of second-generation HIF-2α inhibitor PT2977. This inhibitor possesses increased potency and improved pharmacokinetic profile. 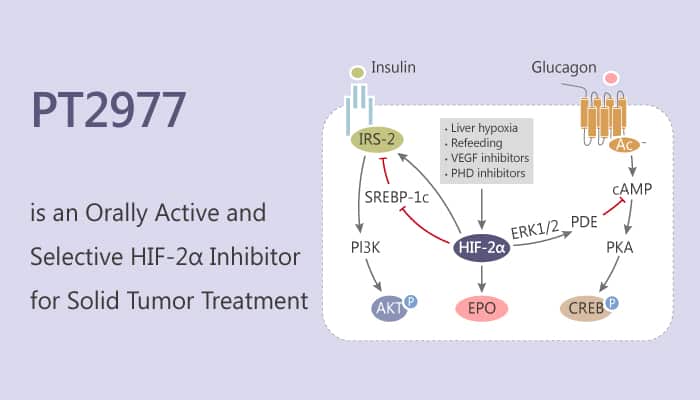 In the study, PT2977 was an orally active and selective HIF-2α inhibitor with an IC50 of 9 nM. PT2977 potently and dose-dependently reduced mRNA levels of human cyclin D1. Cyclin D1 is a target gene regulated by HIF-2α, and leads to rapid and dose-dependent reduction in EPO expression. Compared to PT2385, PT2977 exhibites 2- to 3-fold more potent in the HIF-2α assay.

The authors also evaluated the pharmacokinetic profile of PT2977 in mice, rats, dogs, and monkeys. As a result, PT2977 had low plasma clearance (Clp) in mice, dogs, and monkeys and moderate clearance in rats. Moreover, oral administration of PT2977 in mice, rats, dogs, and monkeys resulted in good plasma exposure. As shown, the AUC of the PT2977 glucuronide metabolite (PT3317) in redentss was higher than the parent. On the basis of these data, the authors predicted that PT2977 would have a reduced propensity for glucuronidation in humans and thus demonstrate a significantly improved pharmacokinetic profile over PT2385.