P53, also known as Tumor protein P53, or transformation-related protein 53 (TRP53) is a regulatory protein that is often mutated in human cancers. Besides, p53 is the strongest tumor suppressor gene. In addition, p53 also induces cell death, and growth arrest and suppresses metastasis in response to various kinds of cellular stresses. Moreover, Oncogenic K-Ras suppresses the p53 function through the induction of Snail, which binds to and eliminates p53 through exocytosis. Specifically, the tumor suppressive function of p53 is impaired in Snail-overexpressed or K-Ras-activated cells. Additionally, the restoration of p53 functions by blocking the interaction of p53 and Snail or by Snail knockdown in K-Ras-mutated cancer cells. So, The specific inhibitor against p53-Snail binding has the potential for the research of anticancer drugs.

GN25 is a specific p53-snail binding inhibitor with antitumor effects. 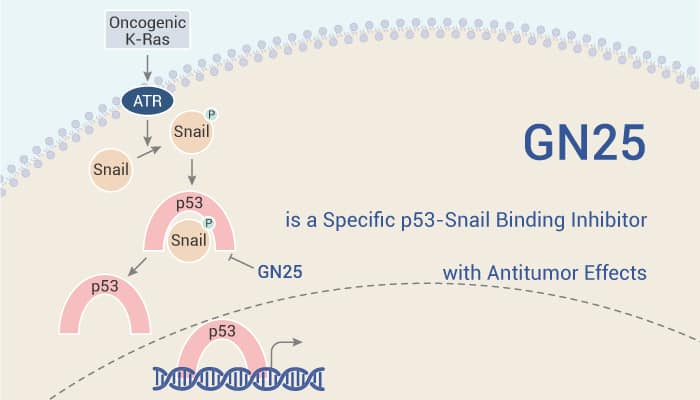 GN25 (10, 20 μM; 24 h) inhibits the cell viability of HCT116, A459 cell lines, and K-Ras-transformed but not N-Ras/Myc-transformed MEF cells. Besides, GN25 (1-10 μM; 1-6 h) induces the expression of p53 and p21 in a dose- and time-dependent manner in K-Ras-mutated A549 and HCT116 cell lines. Moreover, This compound activates p53 in a K-Ras-dependent way and activates wild-type p53 in p53WT/MT cells. Furthermore, GN25 recovers the masking effect of p53 on CK1/GSK3b-mediated Snail phosphorylation. Importantly, GN25 (10, 20 mg/kg; i.p. once a week for 10 weeks) blocks the tumor progression and induces tumor regression in athymic mice with A549 xenografts. Specifically, GN25 shows no significant toxicity in the liver, pancreas, and kidney in mice.

All in all, GN25 is a specific inhibitor of p53-Snail binding and induces p53 expression in a K-Ras-dependent manner. Moreover, GN25 shows an anti-tumor effect against K-Ras-mutated cancer.

DC-S239 is a Selective SET7 Inhibitor With Anti-Cancer Activity