Toll-like receptors (TLR) are a family of highly conserved pattern recognition receptors. They participate in innate immune responses to pathogen infection. Some of the more than two dozen members of this class of receptors that include TLR3, TLR7, TLR8, and TLR9 are localized within intracellular vesicles including the endoplasmic reticulum, endosomes, lysosomes, and endolysosomes

Although the natural ligands for TLR7 derive from viral pathogens,  that act either as agonists or antagonists for these receptors. They also induce immune responses that lead to control of viral replication or cancer cell killing.

TLR7 and TLR8 recognize single-stranded RNA from viruses including vesicular stomatitis virus, influenza A virus, and the human immunodeficiency virus (HIV),2,3 and also recognize synthetic RNA molecules including small interfering RNA (siRNA). TLR7 and TLR8 agonists are effective immunomodulators and they have applications in the research of certain skin tumors and viral infections.

In this article, we mainly introduce the Gardiquimod, a TLR7/8 agonist. It has the potential for the research of cancer diseases. 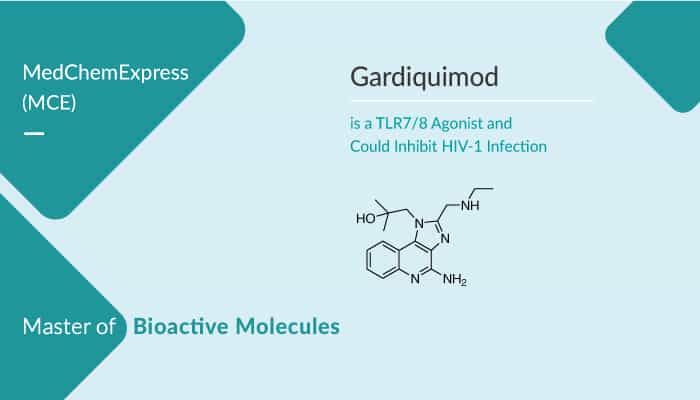 Gardiquimod induces IFN-α transcription and IFN-α protein in PHA-activated PBMCs. It significantly increases IFN-α mRNA levels 80-, 20-, and 35-fold above the level of detection at 2, 4, and 6 h posttreatment, respectively. Real-time PCR is in the application for detecting the mRNA concentrations.

This suggests that TLR7 and/or TLR8 agonists, particularly Gardiquimod, may serve as potent innate and adaptive immune response immunomodulators in tumor research.

CKI-7 is a Dual CK1 and Cdc7 Kinase Inhibitor