Targeted protein degradation induced by PROTAC has become a new therapeutic strategy in drug development. Besides, PROTAC has two covalently linked protein binding molecules. One can bind E3 ubiquitin ligases and the other can bind to the target protein to be degraded. Moreover, the recruitment of E3 ligase to target protein leads to the ubiquitination of proteasome and subsequent degradation of the target protein. Furthermore, PROTAC only needs to combine its target with high selectivity. CDKs are relatively small proteins with molecular weights ranging from 34 to 40 kDa and contain only kinase domains. Nonetheless, they exist in all known eukaryotes, and their regulatory functions in the cell cycle are evolutionarily conservative. The Ser/Thr kinase component of cyclin D-CDK4 complex phosphorylates and inhibits members of the retinoblastoma protein family. It regulates the cell cycle during the G1/S transition. BSJ-04-132 is a potent and selective Ribociclib-based CDK4 degrader (PROTAC). 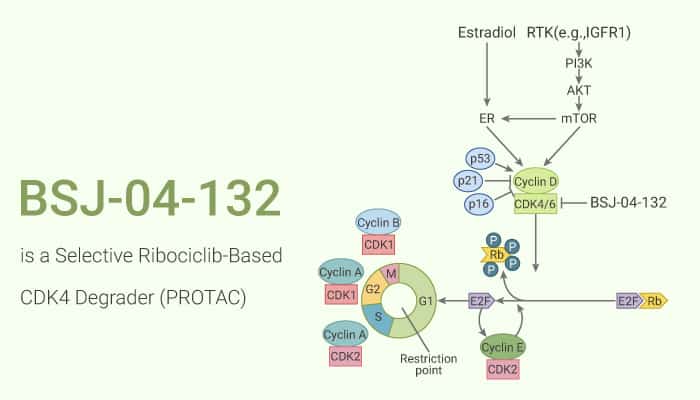 All in all, BSJ-04-132 is a potent and selective Ribociclib-based CDK4 degrader (PROTAC) with anti-cancer activity.

CCT020312 is a Selective Activator of EIF2AK3/PERK