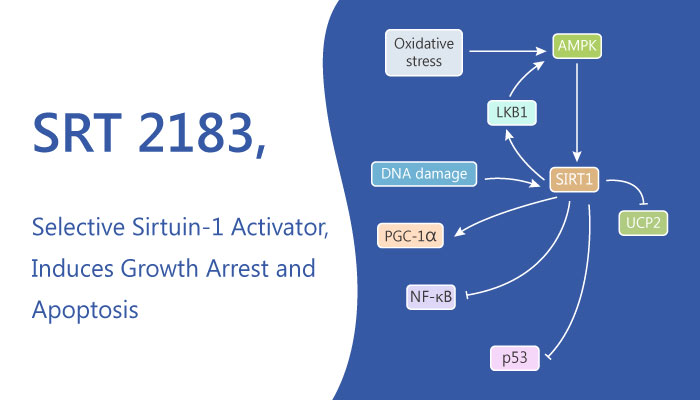 However, currently available SIRT1 inhibitors remain primarily research tools, and those are just for in vitro applications or mouse model studies. Therefore, It is valuable to identify SIRT1 inhibitors with higher potency and selectivity. Thus, efforts to find either derivatives of known SIRT1 inhibitors or novel SIRT1 inhibitors are still in progress. Recent evidence confirms that SRT501 and SRT2183 can directly activate SIRT1 through an allosteric mechanism.

In the study, SRT2183 is a selective Sirtuin-1 (SIRT1) activator with an EC1.5 value of 0.36 μM. In vitro, SRT2183 inhibits the growth of Reh and Nalm-6 cells in a time- and dose-dependent manner. The IC50 (median inhibition concentration) values for SRT2183-mediated inhibition of proliferation at 48 h are approximately 8.7 μM for Reh cells, and approximately 3.2 μM for Nalm-6 cells. Besides, SRT2183 has broad efficacy, with an IC50 at 48 h ranging from 2 to 15 μM. In addition, SRT2183 also induces accumulation of phospho-H2A.X in Reh as well as in Ly3 cells.

In summary, Combination of a class I, II, and IV HDAC inhibitor with SRT2183 plays a potential role in lymphoid malignancies. That may be a new treatment options.

E7820 is an α2 Integrin Inhibitor with Anti-Tumor Activity