Cyclin-dependent kinase 8 (CDK8) is a member of the cyclin-dependent kinase family that plays an important role in promoting cell cycle phase transition, initiating DNA synthesis, and regulating cell transcription during cell proliferation and differentiation. These pathways include the TGF-β signaling pathway, the Wnt-β-catenin pathway, the p53 pathway, and the serum and hypoxia response network. Overexpression of the CDK8 gene disrupts cell proliferation, differentiation, and apoptosis. Therefore, the development of PROTACs for degrading the protein CDK8 has become a new strategy.

CDK8 is a colorectal cancer oncogene that regulates beta-catenin activity. JH-XI-10-02 is a bivalent PROTAC CDK8 degrader with an IC50 of 159 nM. Moreover, JH-XI-10-02 can recruit the E3 ligase CRL4Cereblon to promote the ubiquitination and proteasomal degradation of CDK8. JH-XI-10-02 converts JH-VIII-49 into degrader molecules that simultaneously bind to CDK8 and recruit CRBN to induce degradation of CDK8. JH-VIII-49 is a much-simplified analog of Cortistatin A that exhibits only slightly reduced potency against CDK8 in biochemical and cellular assays. 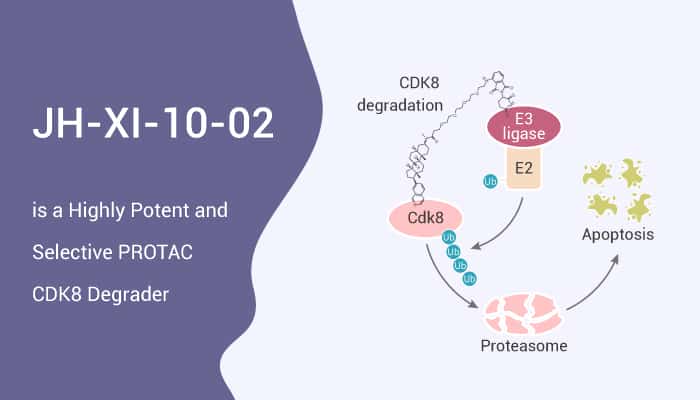 All in all, JH-XI-10-02 induces partial degradation of CDK8 in Jurkat cells upon treatment for 6 h at a concentration of 1 μM. The inhibition of CDK8 by small molecules may be a promising approach for cancer therapy.

DM-01 is a Powerful and Selective EZH2 Inhibitor

MS432 is a Highly Selective PROTAC Degrader for MEK1 and MEK2